I suppose in the final analysis, it all started with Janie. She's my girlfriend, you see, and about a year ago, they cut off her leg.

"Shit! Really?" Sam Hastings asked me.
"No shit. I... I can't believe it," I told him. We were sitting at a corner table at Common Grounds, the coffee house that pandered to the high school crowd in the area. "This guy just plowed into the right side of her mom's car... it really fucked her leg up... they cut it off above the knee just as soon as they got her to the hospital!"
"Goddam! That's fucked up."
"Yeah."
Sam looked across the table. "You okay?" he asked.
"What do you mean?" I asked.
Sam looked away for a minute like he didn't want to go on, but finally said, "I mean, how do you feel. I know the two of you were tight. But, like, she's not gonna be able to do a lot of stuff now..."
The thought sobered me. I had been so shocked at the news that I hadn't had time to consider the ramifications of having a one-legged girlfriend. Would she ever be able to dance at the raves again... even when she got a wooden leg? Would she barricade herself in her room and never come out? What would it be like to make love with a girl who didn't have both her legs to wrap around me?
I finally spoke. "I guess I'll know when I know," I said simply.


"Janie Spencer," I said to the young woman at the information desk. "She's a patient here."
It had been four days since the accident. I, of course, had come directly to the hospital when I heard, but Janie's parents had told me that the doctor was recommending that she not have visitors for a few days. It had been only last night that Mrs. Spencer had called and told me that it would be okay for me to drop by. She'd told me the room number, but I'd left the scrap of paper in yesterday's jeans.
I knocked on the door of room 3714 and a small voice said "Yeah?" 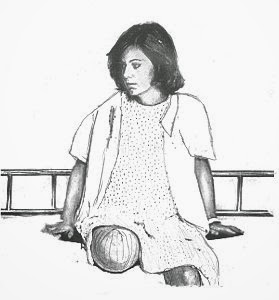 I walked in.
I had been prepared for the shock of knowing that her right leg was missing. What I was not prepared for was the shock that she was sitting up on the edge of the bed, her bandaged stump in full view! She saw me and bit her lip, looking down at the remains of her amputated limb.
"God, Randy," she said, breaking into tears, "I'm fucked!"
I walked over to the hospital bed and sat down on her left, putting my arms around her. "Hey," I finally managed, "don't cry baby. Please don't cry. You'll get me doing it," I added with a small smile.
She slightly raised the mass of bandages, winced a little, then put it back down. "I'm not going to be able to do anything any more," she said, sniffing back tears.
"You don't know that," I told her. "Why, I bet when they get you a new leg, you'll be up and around just like before."
"Now you sound like my doctor and that brain-dead shrink who comes in here a couple of times a day," she said sourly. She paused. "It doesn't matter how good an artificial leg is, I'll still have to put it on every morning and take it off every night." She sighed. "Besides, it's going to be three or four months before my stu.... my leg heals well enough." She looked up at me. "I'm going to have to go around on crutches until then, Randy! God! I can already see everyone staring at it!" She shuddered.
"We deal with all that as it comes," I reassured her. "Besides, the gang is all asking about you. They're going to come up and see you this evening... I already spread the word that the wardens were allowing the inmate to have visitors."
She giggled for the first time. It was my first glimpse of the old Janie.
"These bandages are sure a sight, aren't they?" she said sadly. "I gotta do something with them."
"I've got just the idea!" I told her. "Be back in about 30 minutes!"

**********
Once again, the gang at Common Grounds was gathered around Janie looking at her leg. This time, however, it was not at the amputated stump, but at the remarkable device she had chosen to replace the missing limb.
Janie's new leg was not in any way an attempt to disguise the fact that she was an amputee. Quite the opposite. It had no cosmetic covering. The only part of it that appeared to be life-like was the foot. She had worn sandals, having placed a bit of double-sided tape between the heel of the false foot and the right shoe. The toes of the foot seemed perfectly at home in the open front shoe.
The rest of the leg was quite something else. From the foot up to the black finished knee was a simple metal pipe, bright blue in color. The knee assembly was filled with an assortment of mechanical-looking parts, and was attached to the bottom of the most notable part of the leg. The upper part was made of plastic or something like that and was shaped around the contours of her stump. It was covered completely by what appeared to be decals advertising every heavy metal band in existence!
"I actually had them laminated into the leg," she giggled to Sherry. "They're like tattoos! You can't take them off! It really pissed my mother off when she saw it!"
"Really?" Al asked.
"Yeah. She wanted me to get one of those Barbie Doll legs... you know, that look fake as shit?"
"I like it," I offered. "This makes a statement."
"You're damned right!" she answered proudly.
I looked at the dragon tattoo on my own arm. Lord knows the old man had shit bricks when I'd come home all bandaged up from having had it done. He'd been trying to get me to go to a plastic surgeon and get it burned off, but fuck that noise! It was my statement. I was proud of Janie for making hers.
Al giggled. "I hadn't thought about your losing your leg this way until now," he said, "but you know Janie girl, you've had the ultimate body mod!" He looked around at a couple of faces frowning at him. "No shit!" he continued unabated. "It's a damned site more radical than tats, or piercings, even metal implants! It's way more cool than pinky stumping, even!"
Janie giggled. "I guess it is at that. But some how, I don't see it catching on. Most people wouldn't want to wear one of these contraptions all the time," she added, tapping the composite shell of her leg.
"I dunno..." Al muttered under his breath. "I dunno 'bout that..."

**********
Spring meandered into summer and summer was about to become fall. I hadn't seen Al Franklin all summer, but that didn't mean anything. He and I weren't tight beyond school, him being quite a bit more well off than my family was. Still, it had been odd not to run into him down at 'Grounds' all summer. When he came into the place in late August, I understood why!