I had almost done it again. I had almost dozed off snuggled against Diane's pillow-soft left tit with my leg still strapped up. You'd think that I would learn after a while that doing that's not a good idea.
I sat up in bed as gently as I could so as not to awaken my sleeping beauty. The sexual flush had faded from her ample cleavage quite a while ago. She appeared serenely relaxed, at peace. There was nothing to reveal that scarcely thirty minutes before she had been a caged animal, her claws raking my back, her mouth almost bruising my own with passion. The sex had been that hot!
Of course the sex was always that hot with her when I had my leg up. I reached down and unbuckled the top restraining strap of the harness, the long belt-like part of it that kept it from slipping down off my tightly folded leg when we were in the process of making love. Next, I pulled on the bow knot that held the long shoestring that laced the top half of the device tight. The tension of the lace released, the two halves of the leather enclosure parted with a slight 'pop,' and I easily slipped the mass of leather away from my body.
Slowly, cautiously, I rolled over on my right side, allowing my left foot to turn 45 degrees back to its normal position. The harness kept it pressed tightly against my butt, and the twist that it put on the muscles and tendons would produce a charley horse if I didn't take this part of the operation very, very slowly.
The foot in a more normal position, I now began the gradual process of straightening out the leg. It was asleep, but not badly so. Another half hour and the pain would have set in! It took nearly five minutes for me to ease the leg out as straight as it would go. I knew, again from experience, it would take the rest of the night for the muscles to completely relax and return to their normal tensions.
Pretending offered a lot of problems, but they were a small price to pay for sex of the caliber that being Diane's 'amputee' lover extracted! And, then too, it wasn't like I didn't owe her. She had done something for me, something that I still marvel at her willingness to do.

**********
All of this was two weeks ago, and I tell you about it just so you'll understand what's about to happen.
I'm here in a light sleeping bag with two of my friends from school. We're out here to shoot blackbirds this weekend. We got a farmer who's pissed over what they eat giving us a place to hunt, and in the morning, we're going to try and see how many of the vermin we can bag. 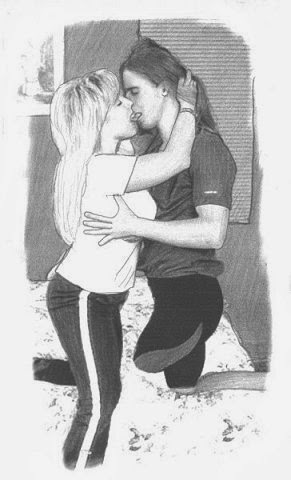 At least, that's what Cal and Hugh think. We're never going to make it to morning! No, those turkeys are going to be busy taking care of me! As soon as the fire burns down a little lower and I'm sure that both of them are asleep, I'm going to take one last huge hit of this PCP cigarette I'm taking short puffs of. I'm going to pick up the revolver and take it out of its holster. The bird shot in it ought to tear the living hell out of my knee. No one will ever know. I'll just say that I was shooting at an animal out in the shadows and was sleepy and missed!
Diane can't possibly want Danny after that! She'll have me as an above knee dood, a LAK like she really wants! Hell, I should have done this long ago. After all, she gave me those huge breasts that she didn't really want! She's never complained once. She's never said she was sorry she did it, even though I know they're big and heavy and the bras she has to wear get uncomfortable sometimes. All I've done is enjoy 'em. She lets me lay there and suck and suck nearly every night!
She's done for me. Yeah, I've pretended for her, but what's that? No! I should have given her equal measure. Measure for measure!
It's only fair.
Posted by Devo Girl at 6:07 AM