I could not decide which was the more beautiful sight, the vast expanse of the azure-blue ocean to my right or the almost inky blackness of the volcanic sands that met it at the island's edge. The fine powder shifted slightly as I walked through it, my footsteps leaving a series of impressions that were periodically washed smooth as the waves rolled in to wash the beach clean again. It was exactly as I had been promised; the tropical island cooled by sea breezes and verdant with palm trees, fruit bushes and huge-leafed plants. Somehow, I couldn't quite remember the plane trip that had to have brought me here. My senses were so overloaded! A bevy of brightly colored parrots flew noisily overhead, wheeling and chasing each other in a cloudless deep-blue sky.
But it was true! The email ad I had received had looked like just so much spam, but it had been legitimate! 'Fantasy Vacations! Literally!' the notice had proclaimed. A return email had led to a phone call which had led to an interview which had led to a trip to Chicago which had led me to this spot! Or what looked like this spot. Part of my mind understood that I was actually floating in a sensory deprivation tank back at Roark Enterprises. The technicians there were monitoring my well being while all the time an electro-induction helmet was imprinting all that I saw and heard and felt and smelled and tasted directly into my brain. It was an illusion! But what a grand one! I even pinched myself to see if I could feel it. The sting registered just as naturally as any other sensation I was feeling, I could not tell it from the real thing!

I was beginning to wonder if the doctors and other minions of the company had made a mistake and sent me on the wrong vacation. Yes, here I was on the tropical island, but it was not the vacation I had asked for. I was alone.
My eyes scanned the horizon all around me. Yes, there it was. High on the hill was the hotel that I had been told to look for. There would be phones there. I could easily place a call back to Roark's home office and they could adjust the fantasy from there. Yes, that's what I would need to do.
I started to cut toward the building, to look for a path through the undergrowth. It was at that moment that a movement down the dark beach caught my eye. It was a figure running along the sand, apparently very far away. As the shape came closer I divined that it was not a person far away, rather it was a small person fairly nearby. A boy perhaps seven or eight years old was running toward me. I dropped to a squat there at the edge of the surf as he spattered to a halt on the sand.
"Are you Mr. Mike?" He asked, dusting the sand off his knees with his hand.
"Yes, my name is Mike," I told the smiling child. He was a cute little rascal and the lack of his lower left arm just below the elbow made him enchanting. His arm! This boy was an amputee! I was at the right place! How surprised I had been when the interviewer had immediately known about devotism when it came up in our scenario interview. I finally got my wits together and asked, "What's your name?"
"I'm Beau. My brother sent me to find you," he said excitedly.
I smiled at the childish enthusiasm for his errand. "Does your brother work here?" I asked. We both stood up and began to walk easily down the beach in the direction from which the boy had come.
"Naw," the boy began, "Kyle and I are here for a vacation!" He flexed the short stump below his elbow several times and gestured down the beach. "You ought to see this place!" He exclaimed.
"How's that?" I asked innocently.
"This place is so neat!" He said excitedly. "There's a whole bunch of great kids here to play with! And guess what? They're all like me!"
"All your age?" I asked.
"Oh, a lot of 'em, but they're like me," he said, lifting his left arm toward me.
"Oh," I said with polite interest. "There are other kids with one hand?"
"Yeah! Some of 'em. There's also some guys with just one leg!"
"How about the girls?" I asked.
"What girls?" He asked. "My brother told me! This place is just for guys!"
"Not even any moms here?"
"Naw. We got a real neat counselor who does all the stuff we need! There's about a dozen of us and we all stay in this one big room just up the beach here! It's a lot of fun! They don't even make us go to bed! We just stay up as late as we can and drift off when we want to!"
"Sounds like a paradise!"
"Yeah! I'm real glad my bro' offered to bring me on this trip with him."
We rounded a point of land that created a gentle corner on the beach and a fantastic sight opened up before me. The blackness of the beach I had trod changed over a bare ten-foot stretch to the pure white of coral sand! A few hundred feet ahead was a set of thatched huts, obviously drink and hot dog stands, and the like. The dozen or so children frolicking at surf's edge were a striking collection of exquisitely broken figurines. Each was missing a single limb, but no two were at the same level, the variegation striking me as having an almost artistic beauty. The group was playing frisbee, a youngster with almost no left arm flipping the disk toward a slightly taller boy who made three powerful hops on his single left leg to make the catch, his four inch right stump flipping up and down as he did so.
As sweet and exotic and engaging as this sight was, the vision a hundred yards further down the beach was even more interesting. It was, on one hand (pardon the pun) a mirror of the scene with the youngsters. Yet, it was different. The frisbee players were evenly split: half of the participants were amputees in some regard, the other half were not. I wondered about that for a moment, but said nothing.
"See the guy with the frisbee?" Beau asked.
"Yes. The man in the blue trunks."
"Uh-huh. That's my bro'. Would you go on and tell him you're here? I wanna get back in the game!"
I laughed out loud. "I'll be glad to, Beau. Thanks for coming to get me!"
"Later!" He called over his shoulder as he ran to join the game. 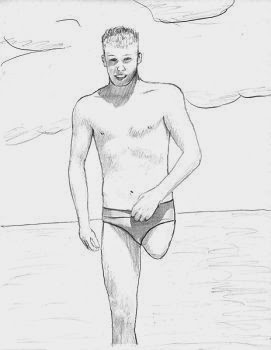