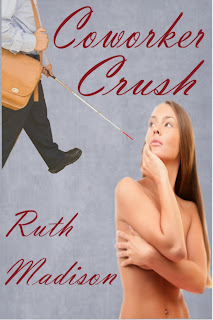 I press the palms of my hands on the smooth, cool surface of the conference table and lean back in my chair, waiting for everyone else to arrive. I love Monday mornings. I know that sounds pathetic, but it’s the best time for me to see Adam while there’s nothing else I need to do. At the weekly meeting I have nothing to contribute, so I can just sit and look at him all I want. He doesn’t know I’m watching him because he’s blind. Though there are times when he seems to sense he’s being looked at and can’t tell by whom.
In a small company full of engineers he is by far the most attractive. He is tall and lean with skin as smooth and supple as stripped willow bark. When it’s his turn to speak, I close my eyes and listen to the rich vibration of his beautiful voice, imagining it whispering in my ear, resonating against the thin skin of my lobe. His breath would send shivers racing over all my flesh.
As with most Mondays, people stumble in clutching cups of coffee and finding seats around the table. Adam always gets the same chair, the one closest to the door, so that he doesn’t trip on the tangle of chairs around the rest of the room. It’s his fingers that enter first, gripping the side of the door frame. He leans his white cane in the corner and walks confidently to his chair, touching its back to make sure it’s there and then touching the seat before he sits.