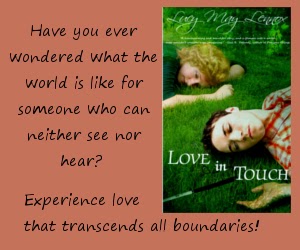 I want to let you all know that my first novel is now available. The title is Love in Touch, and I used the pen name Lucy May Lennox. It's published by Ruth Madison and Dev Love Press. Thank you Ruth! Follow the link to see all the many places to get a copy.

Love in Touch is all new, never before published here or anywhere else. There's a sample chapter at the end of Annabelle's free e-book, Harvard Hottie (and if you haven't downloaded that already, go get it!).

For the next two months, I'll be doing a blog tour, with tons of interviews and guest posts. Check out all the links here.

Love in Touch is a love story between a girl named Kassie and a deafblind guy named Jake. I wrote it for all of you, to be super devvy and satisfying to dev readers. And the cover is by an awesome dev artist! If you enjoy the book, please leave a review online, on Goodreads, Barnes and Noble, or Amazon. Ruth and I really appreciate it!

PS I'm sorry it's taken me so long to update Devo Diary, but I will get back to it soon, I promise!

Keep reading after the jump for a longer plot description and sample section:
Description:


Kassie has felt adrift ever since her dad died when she was in college. Now 24 and living in Seattle, she gets interested in learning sign language through her roommate, a sign language interpreter. One day at a Deaf community event, she sees a young man sitting off by himself. Kassie feels compelled to try signing to him–the fact that he’s strikingly handsome doesn’t hurt.

Jake has been deaf and blind since birth. His disability has cut him off from the world, but beneath his isolated exterior, is a smart, sweet guy with a dry sense of humor. Despite the odds, he’s highly educated, but at 26, he’s gotten stuck in a rut, with few friends and no clear career plans. Until a sweet-smelling girl introduces herself to him unexpectedly, and opens up a whole new world to him.
Jake is more intelligent, more genuine than anyone she has met before, and for the first time Kassie starts to feel like her life has some direction. But as their friendship deepens into something more, the difficulty in communicating with each other only grows, and it seems like everyone they know thinks their relationship won’t work. How can they come to a deeper understanding of each other, and find a future together?


Jake did not seem to notice her approach his chair. He sat with his back rigidly straight, but his head dipped slightly down and to the left. Up close he was even cuter, with his strong, slightly triangular jaw. The contrast between his glossy black hair, slightly grown out on top, and his pale skin was startling. His eyelashes were dark and thick too, although his eyes opened only slightly, showing a line of white.
Kassie waited for a moment, but when he still did not give any sign of noticing her she tapped him on the shoulder. Jake jumped so high she nearly retreated, overcome with guilt for having startled him, but he was already holding out his left palm toward her. Realizing it would be even more cruel to walk away, Kassie extended a trembling finger and wrote very slowly in the palm of his hand, H-E-L-L-O.
To her extreme surprise, he saluted her with the ASL sign for hello, then added, My name is Jake, in rather jerky, hesitant signs. At least that's what she assumed he meant; rather than spelling out his name, he made a name sign, tracing a sort of J against his chest with his pinkie finger.
Kassie made to introduce herself as well, with his hands resting on hers, realizing only too late that when she gestured towards herself, she brought his hand directly onto her breasts. Jake seemed to realize the same thing--he breathed in sharply and flushed from his neck to his hairline, bright pink splotches standing out against his white cheeks. Flustered, Kassie tried again, this time only moving her hand halfway. My name is K-A-S-S-I-E, she signed, fingerspelling her name then adding the name sign Erik had given her, a K at her right temple, a reference to her short, curly blond hair.
Jake did not reply, so she made the signs again, even more slowly, but he kept tugging her hands towards him. She gently tugged back, but that only seemed to agitate him. He brushed his fingers over her palm, then made some rapid signs she couldn't follow. She stared at him helplessly. He sighed in irritation as he repeated the signs, the splotches on his cheeks turning darker red.
This time Kassie picked out C-A-R-T-E-R, but that was all. What is carter, she wondered, feeling increasingly panicked. She glanced behind her, trying to spot Erik, but instead a small balding man with round glasses set atop a hooked nose suddenly appeared and insinuated himself between her and Jake. Before she realized what had happened, he pushed her aside and put his hands under Jake's. Immediately they began signing back and forth rapidly.
Kassie shifted from foot to foot, unwilling to end their conversation so abruptly. If you could even call it a conversation, but still, it seemed rude to walk away. "Umm...excuse me, but who are you?" she asked the interloper.
Without pausing his signing with Jake, the man gave her a sour look. "I'm Joel Carter, Jake's intervener," he snapped.
"Oh, of course!" It seemed so obvious now. "I'm Kassie," she said, fingerspelling her name again and adding her name sign at the end, so he could repeat it into Jake's hand. "I'm a friend of Erik's. I was just, um, saying hello to Jake."
Carter passed along the message, then said, "Jake says hello." Kassie watched their interaction curiously. Carter was not using any ASL signs or fingerspelling she recognized. Jake held out his left palm flat and at an angle, while Carter tapped and brushed it in different places with his fingers, sometimes straight or bent, sometimes one or more than one finger at a time.
"I'm sorry, Mr. Carter, but do you mind telling me what system you're using? Erik said Jake doesn't know ASL, but I guess he was wrong about that. Anyway it looks like now you're using something else. I'm just curious," she finished lamely, realizing she was starting to babble.
Carter was not pleased with her question. "He knows some basic ASL," he answered shortly, "but we're using the deafblind manual alphabet."
"Oh, I see."
Carter stared at her but did not say anything more. After a moment Kassie realized what was happening: Carter didn't want to talk to her. He wanted her to go away, but being an ethical interpreter he was not going to say anything to her he would not also sign to Jake.
"Well, um, ok, nice to meet you, Jake," Kassie said, and patted him on the shoulder as Carter interpreted. Again Jake jumped a bit, and Kassie fled back to Erik on the other side of the room.
For the remainder of the evening Kassie stuck close to Erik, signing briefly with a few people, but for the most part feeling like an observer. At the Deaf meetups there were always lots of people, and she rarely had a problem finding someone willing to let her practice her ASL. But here she realized it was hard to sign to more than one person at a time, and even harder to initiate small talk with a stranger. She never realized how much she relied on catching someone's eye to begin a conversation. She ended up chatting with one of the interpreters about her ASL class, although she knew her teacher would scold her for using her voice.
Back in the car , Erik asked, "So what did you talk about with Jake?"
"Nothing," she replied truthfully.
"I told you his intervener would show up," Erik said as he pulled out of the parking lot. "But he is kind of a hottie. I don't blame you for wanting to chat him up." He turned to wink at her.
To keep reading, get the book from any of the links here.
Posted by Devo Girl at 7:28 PM