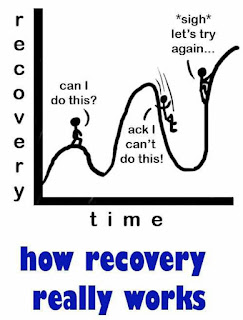 Hey, everyone! I wanted to thank those of you who read each week and take the time to comment. It really means so much to me to know that I'm not the only one who cares about my crazy saga. This week's, next week's, and the week after that's episodes are sort of "capstone" episodes in a lot of ways, building up for some of the crucial events of the season, so bear with me. In two weeks, I'll also treat you to a double episode that I hope you'll really enjoy as the ball really begins rolling for everyone in the Jonesville universe. I have a lot more content in store, so I hope you enjoy!

Oh, and I included the picture at left because it's one of the themes of this season. Kai says it sardonically, but it's true what Dr. Miller has told him: recovery is a process, a journey, and there will be plenty of bumps in the road. I wanted to show, over the course of Season Three, how Kai and those close to him navigate that bumpy road. How there will be frustrations and setbacks because there is no such thing as a quick fix in a situation like his. But I also wanted to explore my usual themes of love and family, of finding one's one path as everyone navigates the treacherous waters of Kai's recovery.

Oh, and one more thing before I forget. I've been doing a collaborative story with some other writers, where we each write a small section in turn. It's obviously very different from my usual writing because it's not just "mine," but if you want to check it out, the first chapter has been posted on Hartmann Write's blog: http://www.hartmannwrites.com/crazy-collab/

So now on to the good stuff...


Last Week on In/Exhale: Kai sees Dr. Miller, who reassures Kai about everything--his hearing loss and his recovery--then starts off a day of testing for his transplant anniversary by having some blood drawn, but things didn't go as routinely as expected when he has a panic attack.

This Week on In/Exhale: Kai's testing day continues with a visit to his dermatologist, but with his hearing out and his body already on edge, Kai's open to attack from his deep past that could potentially affect his future. Vicky makes her reappearance in the story as we begin to see how the last few months have taken their toll on Jon.

Next Week on In/Exhale: Kai gets a visit from someone who has the potential to change his situation, and also "reunites" with an old acquaintance.

As always, I've updated the Table of Contents.

See you all next week,