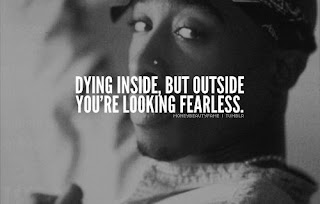 Obviously, I've posted more than 75 installments, but if they were posted together, they counted as one, so here we are, 75! Hard to believe, and still going strong!

This week's episode will be far lighter than the last, giving you all an emotional break, and I hope you will feel Kai's momentary joy here along with him. It feels like a fitting way to celebrate this milestone.

Previously on In/Exhale: We see behind the curtain. The pressures of the entire week mount on Kai, and although he survives, he relapses with his self harm, big time, and even considers suicide before he decides to call Dr. Miller, put his mask back on, and move forward. Renee, frustrated by the distance she feels between her and Kai, especially because of the sometimes language barrier, turns to her best friend and roommate, to whom she confesses all of Kai's hard-kept secrets.

This week on In/Exhale: The long-awaited ASL class, and the curtain firmly back in place. Although David in particular is concerned about his friend, Kai rolls in and slips into his teacher's role almost seamlessly. Steve returns, and we finally get to meet her cousin.

Next week on In/Exhale: The long Friday finally comes to an end as we see the physical and mental exhaustion begin to wear away at Kai, and things come to a head between him and Renee as she decides she will not be a doormat. Kai learns some devastating news that could radically alter the future of Jonesville and his connection to his past.

So I know I took a risk with last week's episode, and I'm glad at least a few of you appreciated it. It was so personal for me in a lot of ways and it was kind of hard to see the intro post get more comments bc of my pictures than the actual post itself, but I suppose that's life. I'm grateful to my loyal readers who give me the impetus to keep posting.

I do think that despite everything I'm going to try for Nano this year. I have a new story idea (ha like I need another one, right?) that came to me very recently and I'm feeling very inspired to work on, partially because it's a disability I've never attempted to write before: blindness. I'm hoping that it will turn into something, and I'll try to post a snippet as soon as I have one to share.

This shouldn't affect the weekly postings of I/E, though, as I have enough pre-written to meet the next month at least. But I'll of course keep you all updated.

Thanks as always for your support, and I hope you enjoy this week's episode!

PS, Oh, and I've updated the Table of Contents, as always.
Posted by Chie Alemán at 6:10 AM