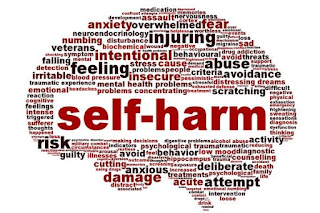 This week's episode is difficult. We see behind the curtain for both Kai and Renee, and there are scenes that may make you uncomfortable. But they're necessary.

When I was working on this season, I got to a point where I knew I had to show Kai's cutting routine. I felt like it was important for the reader to be in his head, and I actually found writing (and reading over) the scene very cathartic. Self-harming behavior, especially cutting, is something that I feel is radically misunderstood by most people. Generally, it's not a bid for attention but an attempt to escape deep emotional pain, to reassert control in a life that otherwise feels so chaotic. It's not unlike a drug addiction in that it involves secrecy, denial, and escalation.

The "sex" scenes in this episode are also slightly unconventional--but then I never do things the way other people do, do I?--and again, may make you a little uneasy. But that's the point. Yes, of course we've gotten in Kai's head plenty this season, but again, this episode is like seeing behind that final curtain to the layers that even Kai is often in denial about.

And as for Renee, she makes a decision with potentially major future repercussions, but that scene came about naturally as I began to feel more and more of what she must be going through as she struggles alongside Kai.


Previously on In/Exhale: Kai returns to class, and although things are rocky, he makes some progress, including making some friends with the Deaf and HOH students, and applying to move into the dorms.

This week on In/Exhale: Kai returns to his creative writing class, and although he survives, the stress of everything pushes him back to the razor. And that's not the only secret he's keeping from those close to him, something that makes him frustrated and ashamed and worried and that magnifies the growing distance between him and Renee. Renee, feeling distanced from Kai but unable to admit her worries to him, turns to a friend. But it's possible that Kai may be closer to the edge than anyone realized.

Next week on In/Exhale: The ASL class at the Jonesville school for the deaf has its first session. Renee is worried about her relationship with Kai, and David is growing concerned about his friend. But for a couple hours, Kai is able to forget about his worries and even be a bit of a "hero."


As always, I've updated the Table of Contents.

I also wanted to thank those of you who commented here or on my blog, not just on the story but also offering your support. It means a lot. There are some days I'm not even able to write, and it can feel almost impossible to get through the day. So it helps to be able to read over your comments to encourage me to keep going. Thank you.