In/Exhale Continues - I Want To Live 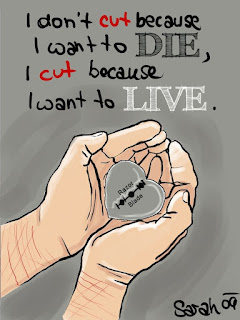 When I introduced Dr. Miller in this version of the story (she had a role in the original iteration), I'll admit I didn't expect her to play such an important role. So I apologize to those of you who don't care for her appearances. However, I've found that she's a bit of my dream therapist, lol, and I find writing and reading some of her sessions to be very . . . consoling, for lack of a better word.

This episode in particular. Although Kai's story, even in its original version, has always had its dark patches, I'll admit even I didn't envision the direction the story would take when I first set out to share it with all of you. A lot of the story is of course, fictional, but there's also so much of me in it--much more than my other writing--that some episodes in particular may be difficult for me to write but can also be extremely therapeutic.

And this episode is one of them.

As several of you have commented, Kai and Renee are slowly heading toward something. Kai still has a lot of self discovery and awareness ahead, but he's slowly, bit by bit, getting there, trying as hard as he can.

This episode is long, but it covers a lot that needed to be dealt with, and I hope you'll enjoy it.

Previously on In/Exhale: The burdens of recovery, in addition to his hearing loss, are taking a toll on Kai and his relationship with Renee. However, Renee is determined to fight for them, confronting Kai about his anger outbursts and his secretiveness. Kai, exhausted after a long day and nights with little sleep, promises he'll be more forthcoming with Renee Saturday afternoon.

This week on In/Exhale: Kai's make-up session with Dr. Miller covers a lot of ground, including Kai's nightmares, his moments of confusion, his panic attacks, and his fears about his behavior and the possibility of his recovery.

Next week on In/Exhale: The time for truth. Bolstered and encouraged after his session with Dr. Miller, Kai first visits David to tell him about his hearing loss, then brings Renee lunch to finally give her some honesty. Renee finds out some details of Kai's past that shock her, even if they don't necessarily surprise her, and the two of them grow even closer.

I want to thank my loyal readers who stick by me each week. So far I had initial hope that the treatment was going to work for my headache, but now it's looking like that may not be the case. There are some days the pain is so bad and so consistent with no relief that it's almost impossible to make it through the day, but knowing I have this small little corner of the world helps in its own way.

Despite everything, I'm chugging away at my NaNoWriMo project as much as I can, and depending on how it goes I may let you all read it. At the very least, I'll post an excerpt at some point. I promise. Ruth is my cheerleader for me not to give up on this project no matter how daunting it sometimes feels. (Me, the super visual writer writing from the POV of a blind man, lol.)

So thanks again. I know it takes time and effort to read my saga, and more to comment, and I can just never say enough how much it means to me to those of you who do.

PS - Oh, I almost forgot to say the Table of Contents is updated, as always.