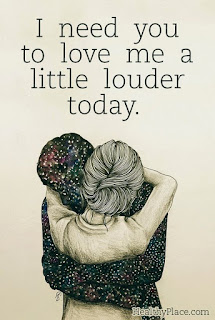 It's hard to believe it's been 4 years since I started sharing my crazy little saga with you all. I'm grateful for all of you who have stuck with me.

Maybe you don't remember, but I started writing this story for myself as a way to work out a lot of the things I was dealing with that I otherwise couldn't. Even after making the story public, there is still a LOT of me in In/Exhale, even if it's fictional, and I still consider Kai my alter ego.

The past 18 months or so have been really difficult, dealing with my health and chronic pain. There was more than one point that I felt like giving up, and thankfully I had a friend to help me see through the murk of depression's lies. Nevertheless, despite having a supportive husband, I still often feel like I'm alone dealing with all of this because it's difficult to understand unless you've gone through it. So some of what follows in the rest of this season was my way of finding a kind of support network, even if it's all my fictional friends. I know that sounds totally insane, and writers are all a little of that. But I promise you, even when it seems to get really dark there is always some light around the corner because Kai has a great family who cares about him. As Stitch says in Lilo and Stitch, "This is my family. It's little and broken, but it's good. Yeah, still good."


Previously On In/Exhale: Kai crashed after interpreting for the ASL club, but Renee supported him and he allowed her to. Later, he built up the courage despite what his anxiety and depression were telling him and went to his counselor, changed his writing class to an ed class, and had his first class with an interpreter. For the first time in Kai's life, he feels like he can actually have a future, and it's terrifying, yet exhilarating.

This Week on In/Exhale: Kai buys his books for class and runs into Steve who tempts him with sweets, so he gives in and buys some Oreos since it's been ages. He binges on them and gets a little high. When Renee comes out of her class to find him, things go sideways. Despite her own fears, Renee is there for Kai, and she's relieved he's letting her in more and more, little bit by little bit.

Next Week on In/Exhale: A long day begins. Renee and Kai deal with the after affects of what happened the night before.


It's possible next week will be a two-parter. Not sure yet.

PS - If you've forgotten what Kai and his pals got up to in the first part of Season 3, you can read the "Previously On..." to refresh your memory. Or you can hit the updated Table of Contents to re-read any episode.
Posted by Chie Alemán at 7:10 AM