I'm so sorry for the unexpectedly long hiatus. I can't promise that the upcoming weeks will be smooth sailing, but I'm going to do everything I can to try to avoid taking more than a week or two off here and there if at all possible. 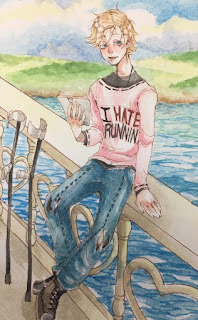 Previously on In/Exhale: Kai and Jon went to visit Harbinger Clinic in Omaha, an expensive private psychiatric hospital that Jon and Dr. Miller had picked out while Kai was sick as an alternative to JMH. Kai's mental illness has been getting worse: he's become suicidal, he's not eating, his panic attacks are more frequent, and the night before he and Jon were to leave for the trip Kai took off, blacked out, and almost got himself killed if Nikki hadn't been there to pull his ass out of the fire. Despite being better than they could have hoped, Kai remains wary of Harbinger and refuses to stay even though he knows he needs it. Meanwhile, Dr. Miller visited County House to get Kai's records and discovered that Kai had been sexually abused.

This week on In/Exhale: Picking up where we left off, it's Sunday. Jon and Kai are in their hotel in Omaha. Jon's own health is beginning to falter with all the stress. He's becoming increasingly concerned that he may have to put his relationship with his brother in jeopardy in order to protect Kai's life.

Next time on In/Exhale: Back in Janesville, Renee and Kai finally reunite after the long weekend apart, but not everything is all roses and kittens. Kai's particularly anxious about his upcoming dinner with Frankie and his new adoptive parents, as well as trying to manage long enough to make it to Valentine's Day with Renee in a few days.

Thank you so much for all your patience and support. The past six months have been so difficult for me, between losing my father so suddenly and getting even sicker. Sometimes Kai and my lives parallel even more than I would have liked!

I can't promise we'll see each other next week, but we will definitely return with the next episode in two weeks. Maybe I'll be able to sneak in an episode of Love UnSeen in between. It'll depend how I'm feeling.

As always, I appreciate your comments and suggestions for both stories.

PPS: The picture is one artist's rendering of a young Kai.