Shadowboxing, Chapter 2: At the Bus Stop

“Your stop’s on Fairway?” I asked as we moved off down Charleton. After a quick glance to confirm the absence of cars in either direction, Asher had abandoned the sidewalk for the street itself; I guessed he wasn’t a fan of the stretches of cobblestones. I paced alongside him; his wheelchair could go at a good clip.

“Yeah, the Ridge St. stop,” he confirmed, which put us at about a 10-minute walk, and then however long it would take the bus to come. Thanks to taxpayers with an enthusiasm for public transit, buses ran every 30 minutes even this late at night, but that still meant it could take an hour end-to-end for him to get home. He must have been thinking about the same thing, because he said, gesturing vaguely at the sky overhead, “Honestly, I think I could use the air and stuff. I need to chill out after that. I don’t think I’d be able to settle down if I called a cab, went home right away.”

I shrugged, not comfortable making a recommendation either way. At that point we hit Fairway, turned left onto its broad, well-lit expanse. I noted, as he regained the sidewalk, that his shakes had subsided.

We continued on in silence for a couple of blocks. I watched my breath puff out ahead of me, glanced around at buzzing streetlights, closed storefronts, dried leaves skittering down the sidewalk, and – not too often, I hoped – Asher next to me. His profile looked tense, and he let loose an occasional hard, audible exhalation. But he looked resolute to me, his mouth set. He wasn’t all right, but there were no signs of panic. I was impressed.

The streetlights showed his hand on the joystick to be finely shaped, with long fingers. I could still see the fingers of his bent-down right hand flexing, but slowly now, almost meditatively, instead of the involuntary twitches I’d seen before.

“Long week?” Asher said suddenly. It was so banal, out-of-place, that I almost laughed outright. I might have grinned for a second.

“You’re not much of a talker, is what I meant,” he said, turning his face up to me and grinning mischievously. His eyes crinkled at the corners.

I tilted my head to one side and started rubbing one ear, taken aback by his sudden pivot. I tried again to ignore how his smile made me feel. “Mm…”

He continued to grin up at me, raising his eyebrows demonstratively; the headlights of a rare passing car rolled over his face and then off again.

It was my turn to exhale hard now. After that, I sucked my lips in. It felt natural to want to tell him, but that didn’t mean I was comfortable doing it. “I used to have a rrrrrrrrr… Rrr. Fuck. Excuse me.” There it was again, on cue. “I used to have a very bad stutter. It’s a lot better now. But it could still be better.”

“Ah, shit, sorry, that sucks.” Asher was looking ahead again, had lost his grin, and his face was hard to read. But the way he said “that sucks” was strangely and immediately comforting, to an extent that belied the casualness of the words. The way he said it seemed to encompass a lot of things – real acknowledgement, acknowledgement without expecting reassuring qualifications (“but it wasn’t really that bad, it made me stronger, God intended this for me”); and a kind of weary acceptance that had to refer to his own state, too. Mostly, I heard companionship.

I went on rubbing my ear without saying anything, until I forced myself to stop fidgeting. “Thanks” felt inadequate, so I gave him a kind of nod, and hoped he knew what I meant. I also hoped that he realized I was being awkward, not reveling in the idea that my pain was unique. Or, you know, plotting to mug him, again. He’d only just met me, for god’s sake. I’d helped him out once, but he still didn’t know me from Adam.

We were almost at the bus stop. After a couple cars went by, sending a slight gust of wind and a low flurry of leaves by us, he cleared his throat and said, “I just keep thinking, if I were you, I would be dying to know how the hell I got myself in that situation in the alley.”

“It’s both a worse and better story than what you’re probably hoping for, depending on how you look at it.”

“I like it, no expectations are even better than low expectations. Well, I’ll cut you a deal since you’re obviously so eager to pry it out of me.” He grinned again, and my insides twisted pleasurably. “I’ll tell you my tale of woe once we get to the bus stop, and if we have time before the bus gets here. Deal?”

“Deal.” I did want to know, but it wasn’t my style to go needling after stuff like that.

He paused his wheelchair, taking his hand off to offer me a handshake. I took it. His hand felt so small. He held on for one second, two seconds longer than would have been expected, his slender fingers pressing gently. I wasn’t sure what my face was doing during that time, so when he finally let go, I composed it as quickly as I could into a caricature of a proud businessman’s – chin tilted up, eyes hooded – and gave him a crisp nod.

He was grinning again as we pulled into the bus stop. It wasn’t a windy night, but even so, it felt a touch warmer inside the shelter, which I found I appreciated even though I’d been comfortable with a worked-up heartrate from the brisk walk. I wondered about him, though; it registered now that his hand had been cold. (Even so, I felt like I wanted to live in the memory of that handshake.)

“Do you need gloves?” I said. His hands just looked vulnerable, I caught myself thinking.

He looked up, a bit surprised. “Actually, that would be nice, now that you point it out. And since it’s going to take me a while to put them on, I can ask you to work on something else for me.”

“I thought I was going to get to hear your story now. I don’t see the bus.”

I looked at him quizzically.

He swiveled his wheelchair a bit to face me, leaned back, and put his hand on his knee. “Look, Roy.”

The way he said it, my heartbeat was already speeding up with an uncomfortable expectancy.

He continued, “You’re very intriguing, you’re very handsome, and I like the way you look at me. And you saved me tonight. So I’m going to ask you to do me the favor of putting your number in my phone, right now, so that I don’t risk getting whisked away into the night without ever seeing you again.”

My face immediately went hot. All I could do was put my hand out for his phone after he’d fished it out of a coat pocket and opened up his contacts. I typed in my info. Now my face felt like it was going numb.

Meanwhile, Asher had also fished out a pair of leather gloves. He’d gotten one onto his right hand while I wasn’t looking, and was now using his teeth to pull the other by the cuff onto his left hand. The way the right glove hung loose made it clear that that hand was significantly smaller.

Finished, he flexed his left hand a few times, then leaned back in his chair again and looked up at me, with the slightest smile on his lips. The glare of the bus stop’s lighting made his eyes look even larger and darker. I handed his phone back to him, and then, struck by a thought, reached into my pocket for the wallet of the man from the alleyway, while gesturing “just one second” to Asher. I flipped it open, looked at his ID – William Riley. (I should have checked that there was ID before I let him run, I told myself reproachfully. From experience, I knew that was only the first of many should-have’s that would be visiting me that night.)

I flipped the wallet shut again, and extended it to Asher. “Might want this too.” He looked blank. “For the police rrrrr – report,” I added. After a moment, he registered what I was referring to, and his face instantly clouded over.

“Thanks,” he said, and took it reluctantly, unzipping his coat to slide it away into an inside pocket. I felt a pang of regret, as if I had soured the moment, and looked away to the side, pretended I was checking for the bus.

“Okay,” Asher said after a pause, “bus schedule says that we have about 8 minutes before the next bus is due. Storytime?”

We smiled at each other. 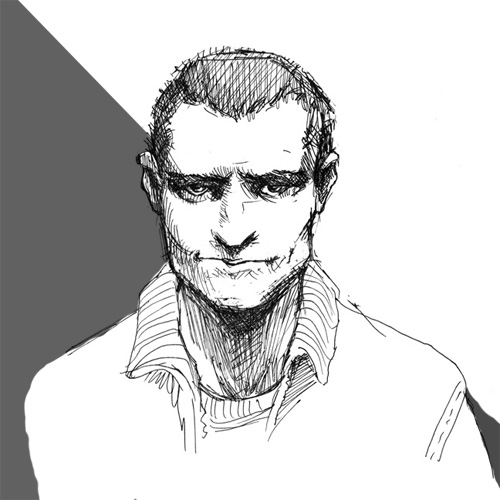 Email ThisBlogThis!Share to TwitterShare to FacebookShare to Pinterest
Labels: Shadowboxing