Hey, everyone! Back with another episode for you!

This week on Love UnSeen: Jackson and Dan's first official date doesn't go as planned, and yet the two grow closer all the same.

Next time on Love UnSeen: Dan brings Jackson to the darkroom to introduce him to a huge part of the photographer's life. 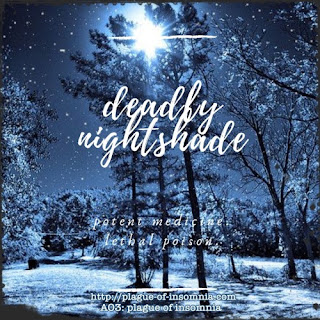 If you guys remember, I mentioned a few weeks ago that I was thinking of writing some Black Butler fanfic, and I have. (Don't worry, Love UnSeen is still my #1 priority right now.) A friend encouraged me to start posting one of my stories (it's called Deadly Nightshade) even though it's in the early stages, so I'm posting it every alternate week from Love UnSeen on A03, where you can follow me as chiealeman or plague of insomnia. (AO3 allows anonymous comments, FYI.) So next week there's a new chapter of Deadly Nightshade and then the week after, Love UnSeen, etc. As of right now, all my fan fiction will have an MC a chronic illness or disability, in keeping with my original fiction.

Deadly Nightshade features an asthmatic Ciel (it's one of the major parts of the story) who is also blind in one eye.

I added a new page to my tumblr blog for my fanfic, which you can read about here. (I'll add it to my website soon.)

Just thought I'd share here in case anyone might be interested in it. As of right now, In/Exhale Season 3 ebook is on hold until I can find an artist for the cover art since the one I had has gone on hiatus.

Thank you all once again for your comments and support! I really appreciate it.

As always, you can catch up in the updated Table of Contents
Posted by Chie Alemán at 7:40 AM